Have you ever wanted to feel like an absolute boss, flying around in an airplane? If so, Air Brawl is definitely a game to consider.

Upon opening the application, you are greeted with a nice and modern menu screen. At the top, there is a region indicator, showing from where you are playing. Below that, you have a username box, where you can conveniently enter whatever username your heart desires. And below that, are the different game options, which are neighbored by a nice model of one of the six ships in the game. Finally, Landfall makes it obvious how updated the game is, allowing you to check with your friends and make sure that you have the newest version.

First, you can see some of the more obvious uses for submenus:

The Options and Control Scheme are nice because they allow you to customize the game to how your personal preferences. The Tutorial is very nice because it not only walks you through exactly how the game works, but it also allows you to fly around freely, making it a great place for practicing and perfecting your piloting skills. Lastly, you have your basic Quit option for when you are finished playing the game.

Aside from those submenus, you also have:

The Quick Match is what I found to be the most effective option for getting into a multiplayer game; you click it, and it puts you right into a match. Essentially, the Air Brawl servers keep that section going on the exact same game mode and map. Then, once a player beats that mode, all of the players get to vote on both the map and the game mode for the upcoming match. If all of the players leave, then they are replaced by CPUs to keep the fun going. Keep in mind, though, the game cannot be won while there are CPUs playing; there must be at least two players on at the same time. Although, I typically did not find this to be an issue.

The Host Match option is very convenient for playing locally. Even if you have just one friend that owns this game, you will be able to play together in your own lobby on whatever game mode and whatever map you would like. The way this works is, any player that has this game is able to make a server titled whatever they want. They are then able to choose how many players it can have, what type of game mode and maps it has, and what the password is (optional). So, there are a lot of options in terms of how you play Air Brawl. It is also important to note that the ability to host a match goes hand-in-hand with the Server List which is just a list of all of the different matches. 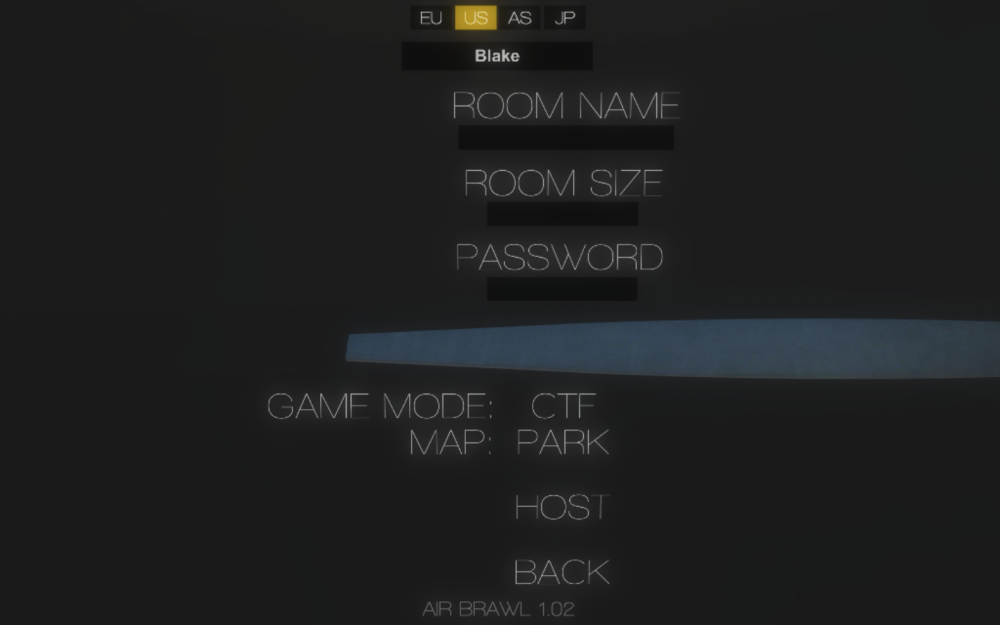 The Brawl Journal is a very cool feature because it allows you to look at your stats that you have attained while owning the game. These include your player level, kills, matches won, etc. Lastly, Offline Mode is a clever option that allows you to play without needing a connection. It works with the Quick Match in that, while you are in Offline Mode, you will automatically play against CPUs instead of real people. This, like the tutorial, is ideal for polishing your skills without playing online. As for the gameplay itself, there are five main maps (excluding the map for the tutorial), seven game modes, and six different planes. Each plane comes with three distinct primary, and three distinct secondary weapons, all of which can be selected on the loading screen before a game. Each plane also has different sizes, corresponding health, and a special ability. Take my word for it, each map, plane, and game mode has obviously been very well thought out and constructed; they all flow really well with each other. The game also, I would say, yields well to all players. It is really easy to get immersed when you first start because you are able to see all of these cool tricks you can do, and you know you just have to get used to the controls first. This was very much the case with me; I was somewhat slow at first, but I very quickly got the hang of it and was able to fly through tunnels and buildings and all sorts of things. It is honestly a cool experience to become so good at flying the plane at such a high speed.

This is a very good game and very much worth the price of $10. In fact, last I checked, it was on sale on Steam for only $5. I highly suggest you give it a try and check out how awesome the different maps and planes are. I would say that it feels much like an actual airplane flight simulator, just without the huge cost. Good job LandFall Games.

One last note: We will be giving away two FREE copies of Air Brawl. All you have to do is retweet this tweet on our twitter, and we will randomly choose two lucky winners.